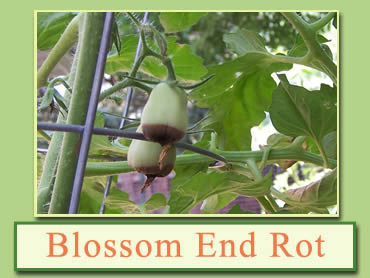 Blossom End Rot is a common problem in the garden. There are a number of reasons for it, but the symptoms are unmistakable. An otherwise great looking fruit will have a sunken, soft, rotten bottom on it. There’s nothing worse in the garden than picking a beautiful fruit and turning it over to see it ruined.

Most commonly seen in tomatoes, Blossom End Rot also afflicts peppers, squash, and melons. It is mainly caused by a calcium deficiency, but that does not necessarily mean that the soil is lacking in calcium. Most times, it is a byproduct of irregular watering. To be sure your soil has enough calcium, add vegetable food that is high in calcium, and you can also spray on a high calcium foliar spray.

Another factor can be that your soil is too high in nitrogen. Avoid adding high nitrogen fertilizers and uncomposted manure. These will help your plants grow leaves, but prevent it from producing fruit.

The biggest thing is to make sure that when you do water, the water gets down to the roots evenly. You’re better off watering every second or third day and soaking the beds deep than doing a short watering every day. You should also be watering at the soil level, whether by using drip lines, soaker hoses, or by flood-irrigation. Water slowly and for at least 10-15 min to give the water time to soak into the soil. Avoid spraying the leaves, as it encourages fungus and can wash pollen out of the flowers.

However you go about it, you should be checking moisture levels before and a while after you water. If the soil is already moist, DO NOT WATER! It also helps to pay attention to the forecast. If rains are expected, you should hold off on water to avoid nature doubling down on the water. It also will help to have a good layer of mulch around your plants to retain moisture and to keep weed levels down.

Luckily, Blossom End Rot is a problem that can be solved. If your plants are afflicted, try some of these steps. Pull off affected fruits as soon as they form to keep the plant from wasting energy on them, and keep adjusting your watering until it goes away. Any changes you make will only be seen on fruits that begin to form after you’ve made them. With a little time, and a little practice, you’ll be growing some great tomatoes.